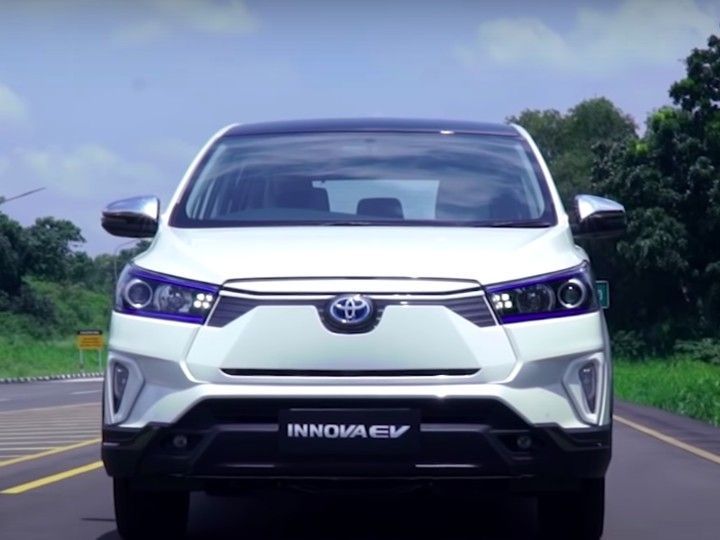 With the trend in the auto industry being electrification, the folks at Toyota have pulled off a surprise in the form of an all-electric Innova. That being said, it broke into concept form at the ongoing 2022 Indonesia International Motor Show, which runs from March 31 to April 10.

First impressions clearly indicate that the Innova EV concept is based on the current generation Innova Crysta. Of course, the overall design looks almost identical, but the electric minivan gets its own identity thanks to a completely closed grille, with the front bumper slightly modified. Along with a new set of alloy wheels, blue decals, blue accents on the headlights and taillights, plus a dedicated ‘electric’ badge showing its EV credentials.

Head inside and the similarities between the Innova EV and its ICE counterpart continue with the three-spoke steering wheel, 8-inch infotainment system and MID pretty much as is. Take a closer look though, and the MID has new colors, and the infotainment unit displays EV-specific information like power output, range and battery level.

The big change in the Innova EV will obviously be the replacement of the internal combustion engine with an all-electric powertrain. Unfortunately, Toyota has kept a lid on the detailed specs for this. But we think it will be a powerful offering not only in terms of performance, but also range.

Of course, this is just a conceptualization of what Toyota can do to keep the MPV alive, but it offers a good preview of what’s to come given that it looks largely production-ready. Back in India, the standard Innova Crysta is selling for Rs 17.30 lakh to Rs 25.32 lakh (ex-showroom, Delhi). While it’s unclear when we’ll see an electric Innova on Indian shores, a test mule has been spotted hinting at a C-segment minivan under the Innova Crysta which is expected to appear by 2023 as a rival of Kia Carens.