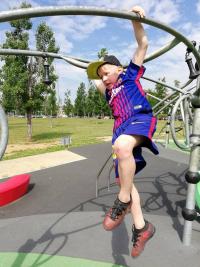 Data collected in Finland, Belgium and Portugal show that Finnish children are ahead of their European peers in terms of motor skills between 6 and 10 years old. Differences in motor skills increase with age and independently of the remarkable differences in overweight between countries.

Gross motor skills of approximately 3,300 children were assessed between 2008 and 2016 using the internationally renowned KTK test. The test measures coordination and balance of the body, which are known to be fundamental for any type of human movement.

“Motor skills are believed to develop with age, but especially in Portuguese children, the results suggest poor development between the ages of 6 and 10,” explains postdoctoral researcher Arto Laukkanen at the Faculty of Sports Sciences and health. “Belgian children came closer to Finnish children, although the difference was also significant for the advantage of Finnish children in this comparison.”

According to the researchers, it is alarming that around 40 percent of the motor skills of Portuguese children are weak or very weak. In comparison, the corresponding figure was around 10 percent among Finnish and Belgian children.

“Internationally, it has been found that a remarkable proportion of today’s children are not developing their motor skills at the rate of the past decades,” says Laukkanen. “In the United States, up to 80 percent of children perform below the standards set in the 1980s. No longitudinal studies have been conducted in Finland, but the results suggest that Finnish children learn motor skills in a rhythm close to that of the past. “

In previous studies, being overweight has been associated with a rate of slow development of motor skills during childhood. This phenomenon has been supported in the present study. Of the Portuguese children participating in the study, around 30 percent were overweight. In Finland 24 percent of children were overweight and in Belgium this figure was around 20 percent. It should be noted that where motor skills seemed to develop equally in normal and overweight Finnish children, motor skills seemed to develop modestly in normal and overweight children, especially Portuguese children. Therefore, being overweight only explained a small part of the difference in children’s motor skills across countries.

“The results suggest that the differences in motor skills between countries are due to many other factors than just being overweight,” says Laukkanen.

Boys outperform girls in motor skills in all of the countries compared. The gender differences were, however, remarkably smaller in Finnish and Belgian children compared to their Portuguese peers.

“It may seem surprising that, based on previous studies, Portuguese children participate more in organized sports than Finnish and Belgian children,” says Laukkanen. “On the other hand, Finnish children are known to be the best internationally at independent mobility, a fact which is linked to a higher rate of active play. A sport culture based on organized sport participation cannot therefore necessarily guarantee the necessary equality, quantity and quality of physical activity in children.

The original article “Comparison of motor competence in children aged 6 to 9 years in the regions of northern, central and southern Europe” was published in Scandinavian Journal of Sports Medicine and Science.

The research was carried out in cooperation with lead researcher Arja Sääkslahti from the Faculty of Sport and Health Sciences of the University of Jyväskylä, Tommi Vasankari and Pauliina Husu from the UKK Institute, Matthieu Lenoir and Farid Bardid from the Ghent University, and Vitor P. Lopes from Instituto Politécnico de Bragança. The study was funded by the Ministry of Education and Culture of Finland.

Warning: AAAS and EurekAlert! are not responsible for the accuracy of any press releases posted on EurekAlert! by contributing institutions or for the use of any information via the EurekAlert system.