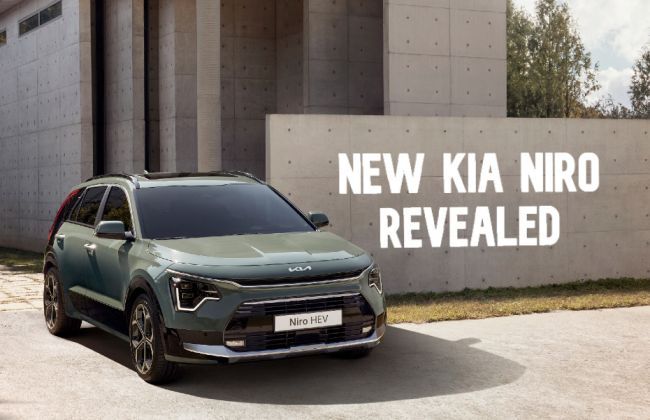 Kia has unveiled the next-generation Niro compact SUV, designed in line with the automaker’s latest design language, first seen on its new range of dedicated BEVs (battery electric vehicles). It also has design similarities to the Haba Niro Concept presented at the 2019 New York Auto Show.

The new Niro design is more modern from every angle. At the front, you have the angular headlights whose shape is further emphasized by the LED daytime running lights. Placed on the edges of the bumper design, they also accentuate the width of the car. The exact styling of the front fascia differs slightly between the hybrid and EV variants, but they have the same theme – a large air dam and a sleek grille spanning the width of the bumper. The air dam is larger on the Hybrid, while the EV sports a flap that likely houses the Niro’s charging port.

In profile, the most distinctive visual element of the second-generation Niro is the contrast panel behind the rear passenger door and above the rear wheels. It extends from the C-pillar to the vertical taillights and follows their shape from the roof to the rear wheel cladding. This angled pillar design has a functional side as Kia says it improves airflow to improve aerodynamics. As we know, aero is the key to getting the most out of an electric vehicle’s range. You can also see this principle in the wheel design of the EV variant, which is different from that of the hybrid.

Another clever design touch from Kia is the side cladding that doesn’t run all the way down the sides. Instead, it starts from the front bumper, ends halfway through the rear door and restarts from the rear wheel arch. This adds to the character of an otherwise sweet compact SUV.

Around the rear, the Niro has a relatively docile design. Its overall length appears to be visually exaggerated by the contrasting panel along the C-pillar, extending behind it. The integrated roof spoiler at the end of a gently sloping roofline also gives it a sporty aesthetic at the rear. There’s a big rear bumper with tough styling details and more lighting units, probably for reversing lights, additional brake lights. The license plate is housed in a recess in the tailgate.

The cabin of the all-new Niro features a streamlined yet modern design with diagonal and horizontal lines. It includes an integrated housing for the large digital river display and the central infotainment touchscreen, angled towards the passenger side. This slope is also reflected in the design of the dashboard, terminating at the front passenger’s corner air vents. Its slight curve also allows it to fit into the overall shape of the cabin with the door armrests with the window controls rising to meet the A-pillar. The two-spoke steering wheel gives the driver a modern yet familiar look.

Another standout visual feature of the new Niro dashboard is ambient mood lighting, which extends from the integrated housing to the displays. Its horizontally stacked blade-like design gives it a futuristic aesthetic.

The central air vents and climate control panel are positioned below the main dashboard, matching the width of the central screen. The center console underneath begins with a recess for storage that also has a wireless charger and various ports for plugging in devices. Behind it is the sleekly styled push button for start/stop and the centrally aligned rotary dial for drive selection. It features an illuminated inner circle with a center button to park the car. This dial is flanked by several controls for the heated and ventilated front seats, parking sensors, parking cameras and auto hold. On the driver’s side, this panel extends a little further back to also include the electronic parking brake.

Kia has also introduced a new Greenzone drive mode on the next-generation hybrid Niro variants. It automatically switches the car to EV driving mode when passing green areas such as residential areas, schools and hospitals. The system makes the switch based on navigation landmarks and driving history data, including home and work locations stored in the navigation system as green zones. The functionality of this feature will likely vary depending on the market.

The new Niro’s green score extends beyond its electric powertrains. Kia has used recycled materials in the cabin, for example, the headliner made from recycled wallpaper and the seats made from Bio PU.

Kia did not reveal powertrain details, but did confirm that the new Niro will be available in plug-in hybrid, hybrid and EV variants. Based on details of the outgoing e-Niro, the new Kia Niro EV is expected to be available with two battery sizes, offering between 400km and 600km of range.

Related: Go with hybrid or go with EV that is the question

It will make its international debut in 2022 but is unlikely to come to India as part of Kia’s regular lineup. The EV variant might later be offered in India as a CBU import like the Hyundai Kona Electric and MG ZS EV.