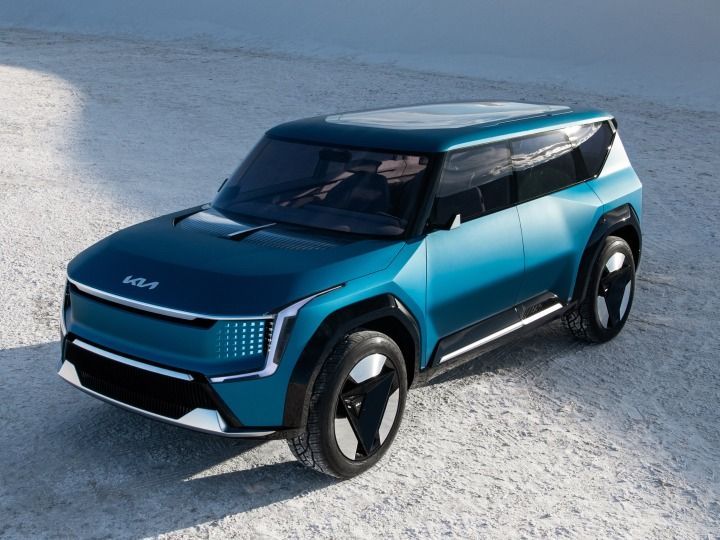 Kia unveiled a new electric vehicle (EV), the Concept EV9 electric SUV, at the 2021 LA Motor Show. It’s a bizarre, boxy concept with vertical A-pillars, and it should spawn a production version that could be a flagship vehicle of Kia’s range of electric vehicles. After the EV6it is the second vehicle supported by Hyundai-Kia’s dedicated E-GMP global modular platform for electric vehicles.

The EV9 SUV was designed with Kia’s new “opposites united” philosophy. According to Kia, it uses recycled marine waste in its construction – old fishing nets make up the floor of the electric vehicle and the seat fabric is made from recycled water bottles and wool fibers.

At 4.9 meters, the Kia Concept EV9 is about the same size as an MG Gloster. It features Kia’s new “tiger face” fascia and full LED headlights. It also has 22-inch aero wheels and interesting angular taillights. The production version is expected to be a 3-row family SUV.

Inside, the EV9 gets an ultra-wide 27-inch display for driver instrumentation and infotainment. The steering wheel is a yoke that comes out of the dashboard. It retracts into ‘pause mode’, allowing you to turn the EV9 into a ‘first class lounge’. In Pause mode, you can turn the first and third rows face-to-face, and the second row folds down to become a table. Alternatively, Enjoy mode lets you lounge outside by opening the tailgate and turning around the third and first rows.

Kia has yet to release powertrain details, but for your information, the EV6 EV has an optional AWD powertrain that should find its way into the EV9. With electric motors on each of the front and rear axles, total output is 585hp and 740Nm. Kia claims the EV9 SUV will have a range of 480km and will be able to charge from 10% to 80% in just half a -hour at a peak rate of 350 kW of DC fast charging current.

We expect to see an unveiling of the production Kia EV9 next year, and it could hit the market in 2023. It’s too early to say if it will make it to India, but with a growing electric car market, we can only hope with our fingers crossed. Watch this space for more news about all-electric global vehicles making their way to our country.