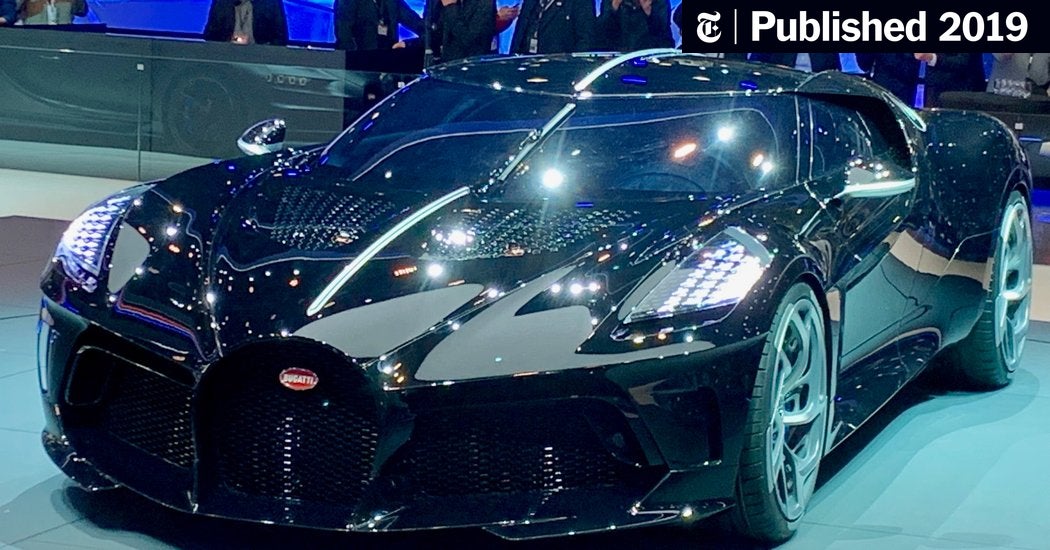 GENEVA — The Geneva International Motor Show, which kicks off this week, never runs out of star power, but a one-of-a-kind Bugatti outshines simple supercars this year. “La Voiture Noire,” or “the black car,” sold before the show even opened for $19 million, reputed to be the highest price ever paid for a new automobile.

“It’s one of the only ones,” said Stephan Winkelmann, managing director of Bugatti, a French brand long owned by Volkswagen. “There will never be another. I am happy to report that it sold for 16.7 million euros.

Was that price outrageously high?

Certainly, other less exclusive collectible Bugattis from the marque’s 110-year past have sold for more; for a time a Bugatti Royale, one of the few ever made, held the record for the price paid at auction. And vintage Ferraris sold for more than double what the Black Car fetched. But it’s a record for a new car, Mr. Winkelmann said.

Although the name of the buyer was not disclosed and details of how the final price was determined were scarce – some sort of auction among brand aficionados is a good bet – Mr Anscheidt said he thought the Black Car was a solid investment.

It was meant to capture the spirit of the brand’s celebrated designer, Jean Bugatti, and his personal Type 57SC Atlantic coupé, Mr Anscheidt said. After Bugatti’s death in a test accident in 1939, legend has it that his Atlantic – one of four built – disappeared in 1940 while being transported by rail to Bordeaux to save it from the advance of the Nazis.

The Black Car has a roofline similar to what is known of this rather mysterious Atlantic, including a dorsal fin running down the center; the grille of the horse collar; and the characteristic swoop of the cabin’s side windows.

“It evokes the past, but it’s not retro,” said Mr. Anscheidt, Bugatti’s head of design since 2004. there’s nowhere to go with retro.’ Yes, I can go where I want with the design, but in the end I have to coordinate with the engineers to achieve what is technically possible.

He said his design was “something that’s been sitting in the back of my desk drawer for 10 years”. It had to be reworked countless times to be aerodynamically and technically feasible. Engineers had to work their magic for function, as well as form, to achieve the car’s desired top speed beyond 400 kilometers per hour (250 mph), he added.

Technically, Mr. Anscheidt’s design would be powered by a 16-cylinder engine similar to the current Bugatti Chiron’s 1,500 horsepower monster. But here’s a little secret: the vehicle presented at the Geneva Motor Show is not powered by anything. This is just a scale model of what the finished Black Car should look like.

“What was shown here was put together in 16 weeks,” Mr. Anscheidt said. “I don’t even know if I would call it a concept, at this point.” He said it could be two and a half years before the owner takes delivery of his treasure.

The Black Car therefore remains something of a mirage, just like Jean Bugatti’s legendary creation.

“Look closely. I doubt it will be seen again,” said Mr. Anscheidt, who expects the finished car to disappear into the owner’s extensive private collection. “Maybe his son will drive it one day. Maybe you’ll see him on the lawn at Pebble Beach.

The Geneva Motor Show, dating back to 1905, is one of the last of a dying breed: a truly glamorous and fantastical display of almost a million square feet of fanciful automobile flight. Other shows in Frankfurt, Detroit, New York and Paris evolved into somewhat more utilitarian displays of automotive ideas for the masses.

Geneva offers no such claim; if the world is heading for climate catastrophe in the foreseeable future, the Geneva show will end, like the band on the Titanic, playing for time. For the time being, activity remains sustained.

Although there was no match for the Bugatti stand – which included two other vehicles pre-sold for several million dollars – the other exhibitors at the show presented a plethora of seven-figure offers. Italian design house Pininfarina has unveiled its first branded road car, the 1,900 horsepower Battista, named after its founder. The company says it’s also pre-sold, despite an asking price of $2 million. More could be available by 2021, according to a press release.

Other so-called hypercars have been unveiled by Pagani, Koenigsegg, McLaren, Aston Martin, Zenvo and Ferrari. Exclusive special editions were presented by Bentley, Rolls-Royce, Lamborghini and many others. There was also a flying car concept. So maybe the future holds changes, even for Geneva.