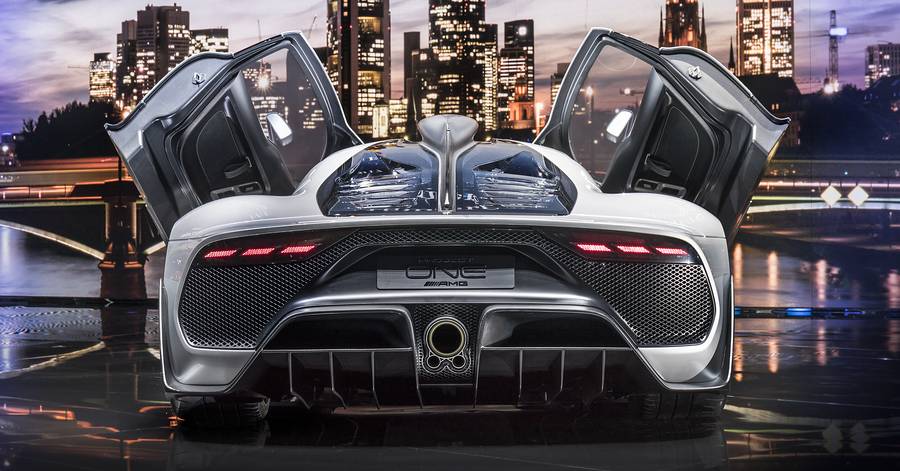 Two weeks There (September 11th), the day before the IAA Frankfurt International Motor Show opened to the press, I walked through the doors of Daimler Mercedes-Benz’s sprawling lighter-than-air pavilion thinking that I knew the story. I even had a headline: Stuck Throttle from Daimler AG.

The oldest of the German car manufacturing giants, Daimler’s recent finances have rocked. The group’s turnover increased by 3% (153.3 billion euros) in 2016, with record profits (8.8 billion). Mercedes-Benz Cars in particular has come back strong to reclaim the title of the world’s number one premium luxury brand. Sales increased by 9% in the second quarter of 2017 alone. Product design kills it.

The star of the 2017 Frankfurt Motor Show was the Mercedes-AMG Project ONE hybrid hypercar, for fairly obvious reasons: the spoiler. A large carbon fiber vertical stabilizer, inspired by the F1 design, which may be alien or essential, or most likely both, rises from the show car’s sphere-shaped canopy. Crazy.

At its heart, if Project ONE has any heart, is a late-vintage Formula 1 powertrain: an electrically turbocharged 1.6-litre V6 capable of revving over 11,000 rpm; and three ferocious high-speed engine generators (161 hp each), one rear and two front, providing all-wheel drive and fully independent torque vectoring.

At its heart, if Project ONE has any heart, is a late-vintage Formula 1 powertrain: an electrically turbocharged 1.6-litre V6 capable of revving over 11,000 rpm; and three ferocious high-speed engine generators (161 hp each), one rear and two front, providing all-wheel drive and fully independent torque vectoring.

Even the Formula 1 team wins. Lounging on stage, an Amazonian creature in a windswept carbon fiber negligee: the Mercedes-AMG Project ONE, a street-legal hypercar built around the +1,000hp hybrid powertrain of a Formula One car 1. Each of the 275 copies costs 2.7 million euros. The engine is running over 11,000,000. This should be animated.

But Daimler’s solemn commitment to eternally high returns, what it calls a “sustainable” 10% net profit for shareholders, means it can never let up on the accelerator. And he’s headed for a wall. A Great Wall. In China.

See? I even had some catchy phrases handy.

Two days before Daimler’s cheering rally on September 9, industry ministers in China confirmed that, like France, the UK, Norway and the Netherlands, the biggest vehicle market in the world (24.4 million in 2016) would phase out sales of fossil fuel vehicles in favor of widespread state-sponsored vehicle electrification.

Because of climate change? In a way, of course. But with its cities shrouded in deadly smog, China’s air quality concerns are more regional than global. The nation of 1.37 billion souls is also trying to kick the habit of imported oil. China has already set out tough electrification mandates for automakers, with costly sanctions behind them, that have left German automakers begging for mercy. With the help of German Chancellor Angela Merkel, the start date was pushed back to 2019.

While not unexpected, China’s announcement brings two things the EV battery industry badly needs: demand certainty (although mandatory) and scale. Global battery production is expected to double over the next five years. As a down payment on its plan to become the world leader in energy storage devices, China will add 120 gigawatt hours of annual battery production capacity by 2021. That’s three times the production of the Gigafactory of You’re here. Ulrich Eichhorn, VW Group board member for research and development, told Automotive News that the company will need more than 200 gigawatt hours of batteries by 2025 to meet its targets.

Today, sooner than later, China’s mandates will push the market price of batteries below the $100/kWh threshold at which – roughly, all things being equal – an EV design will reach battery parity. costs with an internal combustion vehicle. After that, Katy bars the door.

The other skunk at the Daimler picnic was Dieselgate. Two years after Clean Air investigators discovered emissions software in VW Group products, affecting 11 million vehicles worldwide, the outrage and public anger have become widespread. In remarks from the stage, Daimler AG Chairman Dr Dieter Zetsche pushed back against the growing sentiment in Europe to restrict diesel vehicles or even ban them altogether. “It is a fact that it is worth improving modern diesel engines rather than banning them,” Zetsche said. “That’s why Daimler has invested 3 billion euros in the further development of our diesel engines.”

With respect, it’s a bit post-hoc: it’s the 3 billion euros already spent that are worth it, not the other way around. Even Project ONE raised an eyebrow.

In any event, Mr Zetsche will have to discuss this with the peoples and parliaments of Europe. In two years, the market share of diesel has fallen by 8%. In court in Germany, sales fell 14% in August compared to 2016. Madrid, Paris and Athens announced diesel bans to tackle urban concentrations of NOx and particulate matter, which will come into full effect from by 2025. Even Daimler’s hometown of Stuttgart wants to brush the city’s famous soot off its shoulders.

It’s worse than it looks. In Western Europe, automakers depend on the profits of large luxury vehicles, many of which are powered by diesel engines, which produce less carbon per kilometer than their petrol counterparts. Without diesel carbon offsetting, automakers have no hope of meeting European Union average fleet standards (95 grams per kilometer by 2021) or avoiding steep pollution fines, Brussels for non-compliance.

The theme for the Mercedes-Benz media gala was #settingthemood; but everywhere I looked I saw #sunkcostfallacy, the human tendency to double down on bad bets for fear of losing what economists call sunk costs. But sunk costs are by no means recoverable, hence the fallacy.

It’s hard to know when to leave. But walk away. Diesel is politically condemned in Europe. China’s electrification mandates represent a whole new industrial super-gravity. Given these events and the growing public sanction, Mr. Zetsche, how long can the German car industry afford to cling to diesel? Long enough to recoup sunk costs? Oh dear.

Anyway, even that wasn’t the big story, the real story. Have you seen those heels worn by F1 driver Lewis Hamilton? G’wan, mate.

Corrections & Amplifications
An incorrect version of this piece was originally posted online. Madrid, Paris and Athens have announced diesel bans to tackle urban concentrations of NOx and particulate matter coming into full effect by 2025. An earlier version put the year as 2015. Daim is the oldest of the German giants automotive manufacturing; an earlier version said it was the oldest and largest. Ulrich Eichhorn told Automotive News that the VW Group will need more than 200 gigawatt hours of batteries by 2025 to meet its targets; an earlier version said it would need 200 gigawatt hours. Clean-air investigators found emissions software in VW Group products, affecting 11 million vehicles worldwide; an earlier version said “over” 11 million. Additionally, the Audi Aicon concept has no steering wheel, pedals or other basic cabin cues. A previous version of the slideshow included an image of the Audi Elaine concept, misidentified as the Audi Aicon. The image has been deleted. (September 22).