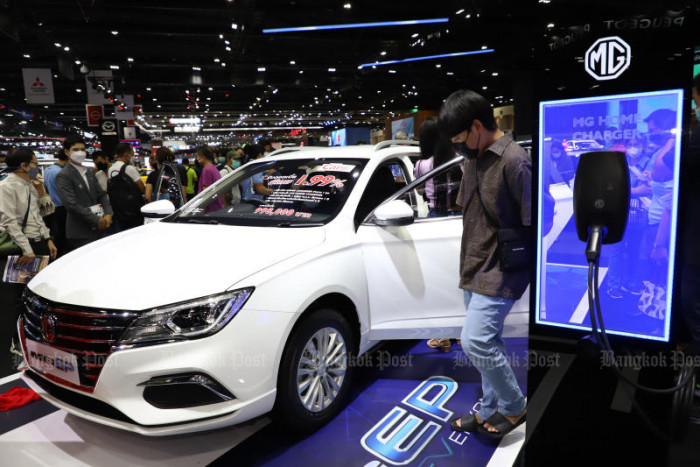 Visitors look at an MG EP, one of the electric vehicles debuting at the Bangkok International Motor Show, which ended on April 3. (Photo by Varuth Hirunyatheb)

Sales of electric vehicles are set to explode this year but it will still be some time before they overtake the number of conventional vehicles on the country’s roads.

The Federation of Thai Industries (FTI) earlier released a forecast that around 5,000 electric vehicles would be on the roads this year, but figures from the just-concluded Bangkok International Motor Show indicate that the goal will be easily achievable.

Automakers sold about 3,000 electric vehicles, or about 10 percent of total reservations at the event, according to Surapong Paisitpatanapong, vice president and spokesperson of the FTI automobile club.

Its figures differed from those announced by the organizers of Grand Prix International Plc after the end of the 12-day show. They said 2,040 EV units were reserved at the event.

“We could see 8,000 to 10,000 electric vehicles this year as cheaper brands are expected to arrive,” Surapong told a CU Radio news program carried by the Chulalongkorn University.

EV reservations this year represent a huge jump from just 200 in 2017, thanks to tax cuts and government subsidies to promote clean air and green energy, leading to cheaper prices for consumers.

Still, Mr Surapong said he did not expect electric vehicles to overtake internal combustion engine cars in the next 10 years, given the advantages of conventional vehicles and infrastructure for people. feed.

“Internal combustion engine vehicles are still a choice for consumers in terms of convenience for refueling and commuting,” he said. But they will be phased out over the next decade, he added.

The country has about 17 million gasoline-powered vehicles, including 10 million passenger cars that can seat no more than seven passengers. The kingdom has only 5,000 electric vehicles and 2,400 charging stations, mainly concentrated in Bangkok.