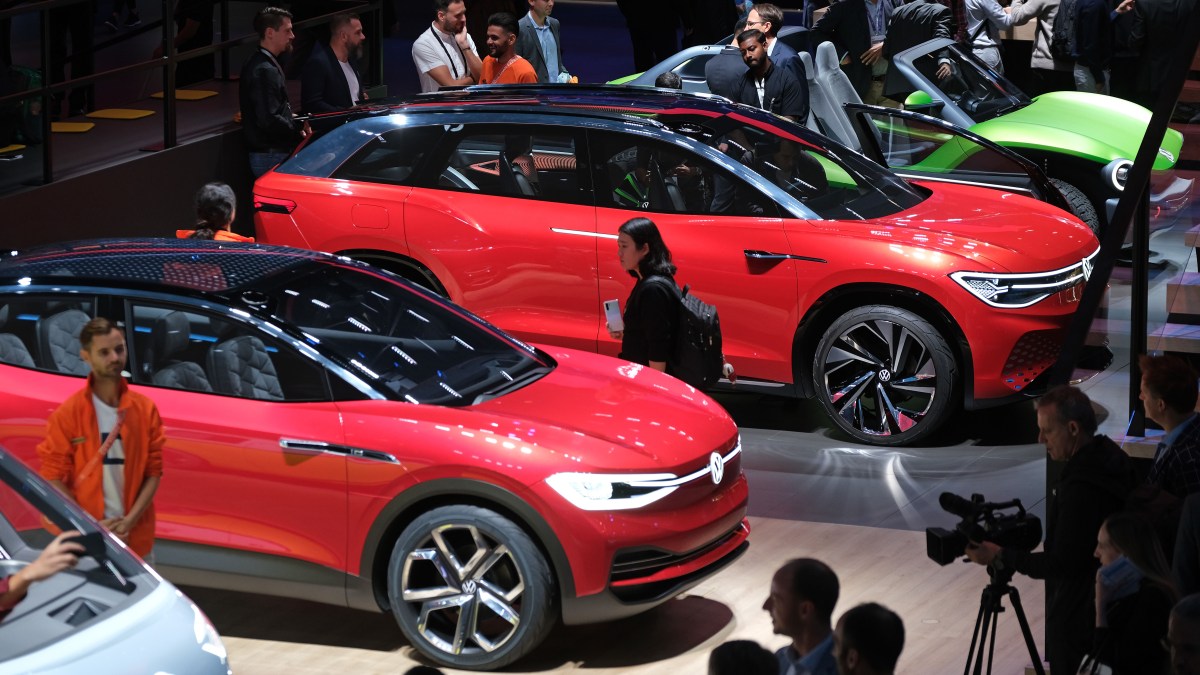 The Frankfurt Motor Show opened this week in Germany and automakers are showing off their hot new electric vehicles. As always, the prices of many electric cars are well beyond the means of a humble employee of public radio. You have your Porsche, your Mercedes-Benz, your BMW. But in Europe there are also many other offers with prices closer to what the average consumer could buy.

That’s what struck Marketplace’s Jack Stewart. He covers transportation, so I asked him how EVs were marketed and bought this year in the US and overseas. The following is an edited transcript of our conversation.

Jack Stewart: I think we really see that tipping point now where automakers are presenting some, at least in concept form, compelling EVs, but a lot of them in real form as well – cars you can buy. The Volkswagen ID.3 is Volkswagen’s new car for the people. It could be as important to the business as the Golf, or what you used to call the Rabbit here in the United States, or as important as the Beetle, maybe. It’s their car for everyone. It’s their affordable car.

Jed Kim: What price are we talking about?

Stewart: From mid-$ 30,000. In fact, they won’t be selling that one in the United States. We will only buy the larger ones; we get the SUVs. They think we only like big vehicles here, which is kind of true. But for the rest of the world, that’s what we’ll see: small electric cars are just starting to enter the market properly.

Kim: To some extent, I’m not surprised that electric vehicles are so featured at a European auto show. In the United States, what could motivate customers to buy this electric vehicle?

I think if you started showing some of these fascinating vehicles… in the United States, then maybe they would adapt a little faster.

Stewart: Funny that you weren’t surprised to see them on a European show. I think all series have their own personality. You have the Paris auto show, and it’s like, ‘Look, this is my weird car. This is so cool. Look at the design. And you have the Geneva auto show, and these are super cars and premium, massive, expensive, high-performance vehicles. Frankfurt is technology – green technology. So it’s no surprise to see these vehicles in Frankfurt. We’re not going to see the same kind of vehicles at the Detroit auto show, which is trucks, SUVs, and muscle cars. Personally, I think it’s a bit of a shame. I think if you started showing some of these fascinating vehicles and their fun designs and some of the advantages of electric vehicles in the US then maybe they would adapt a little faster.

Kim: So besides getting people thinking and dreaming of driving electric here, what other obstacles are preventing people from adopting them on a large scale?

Stewart: I think a lot of it is perception. We’re in California right now, so we have a different perception of EVs because we see them on the streets a lot than someone who lives in a city in the middle of the country without a great charging infrastructure. If you don’t see these other cars on the road, if you don’t see a bunch of chargers everywhere you go and realize that it’s pretty easy to charge something up, then I don’t know why that would be. necessarily lit your shopping list to buy an EV.

Kim: This show takes place in the midst of a trade war between the United States and China, and Britain is still heading for Brexit. Is the automotive industry sensitive to these tensions?

Stewart: Absolutely. The automotive industry is global and wants to be even more global. If you are one of those companies that build these vehicles that are very expensive to develop, which take years to develop, you want to be certain of the future of what is going to happen. You want to know what kind of environment you’re going to be selling in terms of regulations, environment and emissions, but also trade and parts sourcing. The global supply chain for a vehicle is now global. It is almost impossible to break it down by country. It’s hard. These automakers have to deal with that on top of all of these other uncertainties about who wants to buy these cars, if they are building the right thing for the future.

As Stewart told us, automakers are making electric vehicles more affordable, but they’re still worried that people will buy them. The Wall Street Journal said that is why automakers are using the Frankfurt stage to tell governments they need help in the form of tax subsidies and other incentives. Even in Europe, which has some of the strictest emissions restrictions, sales of electric vehicles for the first half of this year accounted for just 2.4% of vehicles sold in the European Union.

If you’d like to see some of the cars on display at the Frankfurt Motor Show, CNET has a list of them. You can see the Hyundai 45 that Stewart is salivating at. It’s retro, a tribute to the first car the company launched 45 years ago. I think it sounds like something Robocop would drive. Korean robocop – I would watch this.

I just learned that if you google “Korean Robocop”, you get an ad for the cyborg protector shilling fried chicken in Korean. I don’t know what’s going on.

Finally, big developments for drivers, at least for drivers of the gig economy. California lawmakers have voted to force app-based companies to treat their contract workers like employees. If signed by Gov. Gavin Newsom, Assembly Bill 5 will have a huge impact on Uber and Lyft, which will need to deliver benefits. Molly Wood spoke about it recently with Marketplace reporter Meghan McCarty Carino. It is estimated that the annual cost for Uber will be $ 500 million, and $ 290 million for Lyft. Uber says it believes the new law gives it the option of continuing to operate the same way. Yet that company, Lyft and DoorDash have already pooled $ 90 million to launch a campaign to create a new classification of workers. They want to bring it to California voters next year.