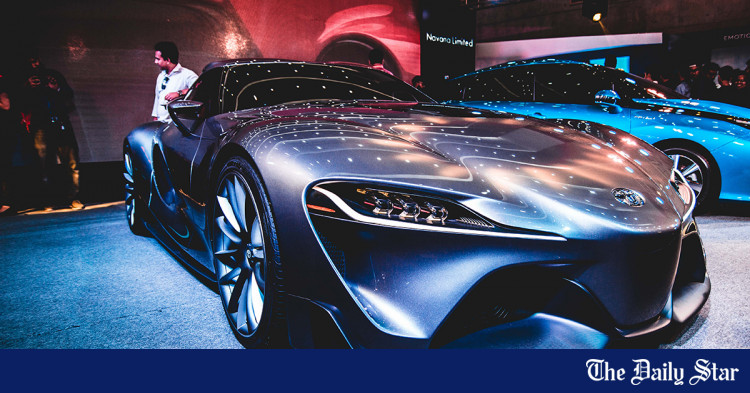 Organized by CEMS Global, the annual event provides a platform for the private and commercial automotive industry in Bangladesh to showcase their products. This year, local authorized dealers for brands such as Toyota, Honda, Mercedes Benz, Ford, Mitsubishi and newcomers Peugeot presented their latest offerings to the growing automotive sector in Bangladesh. The facelifted Toyota Vios and the Mercedes CLA took center stage among the new cars.

A special attraction this year has been the introduction of concept vehicles – with Toyota/Navana Limited showcasing the FT1 sports car and the Mirai hydrogen fuel cell vehicle, this is the first time a concept car prototype has been presented at the Dhaka Motor Show. While presentations of concept cars are common in larger markets and higher caliber auto shows (like the Geneva Auto Show or the Detroit Auto Show), the presence of these vehicles at the Dhaka’s automotive this year means it is a growth market for global brands such as Toyota. The motorcycle industry in Bangladesh is also growing steadily – Japanese brands such as Suzuki and Kawasaki are now competing with cheaper Indian and Chinese brands, bringing more diversity and choice to consumers in an already large sector.

At the same time, Shift organized a classic car meeting in collaboration with the Old Car Club of Bangladesh and Motorwerks Ltd. Featuring nearly everything from restored Land Rover Defenders to a re-engineered Datsun to classic American muscle, the meet was a resounding success. The 1969 Ford Mustang, 1971 Dodge Charger and 1957 Chevrolet 150 were big hits with the crowd.

Over 620 booths spread across 5 halls housed brands and suppliers from over 16 countries including Japan, South Korea, France, China, India, USA, Italy, UAE Arab States and Bangladesh. With the number of attendees steadily increasing each year, CEMS Global is optimistic about the impact of these events on the local economy.