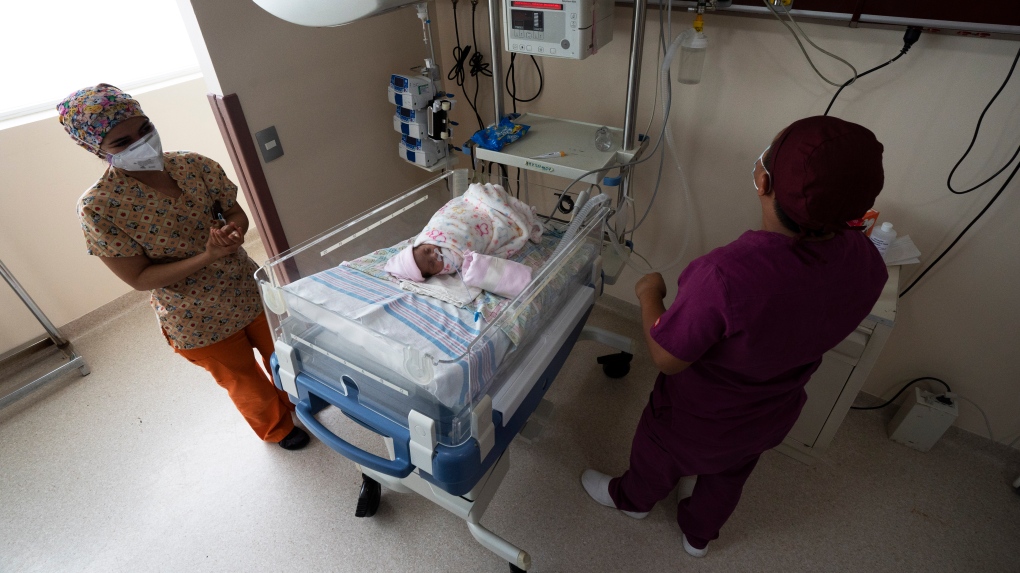 Infants born to those who tested positive for COVID-19 during pregnancy may have neurodevelopmental problems after birth, according to new preliminary findings from two separate studies in the United States and Spain.

The peer-reviewed US study, published in the journal JAMA Network Open on June 9, examined 7,772 infants born during the pandemic between March and September 2020 at six Massachusetts hospitals, 222 of whom had prenatal exposure to SARS-CoV -2. The results showed that this latter group of infants were more likely to receive a neurodevelopmental diagnosis during the first year after birth.

Separately, a small Spanish study compared 21 cases where the parent tested positive during pregnancy and 21 babies who were not exposed during pregnancy at the Marqués de Valdecilla University Hospital in Santander, Spain. The analysis showed infants exposed in utero had more motor difficulties six weeks after birth, findings that were presented at the 30th European Congress of Psychiatry in early June.

The two studies are the latest to examine infant neurodevelopment and prenatal exposure to maternal SARS-CoV-2 infection. Some previous research has found an association between the two, while some studies have suggested that maternal stress during the pandemic may be a major contributing factor to these undesirable neurodevelopmental changes.

Both new studies stressed the preliminary nature of their findings and said a larger study over a longer observation period was needed to better understand the results.

Comparing infants who were exposed during pregnancy to those who were not, researchers in the US study found that a diagnosis involving motor function or speech and language was ‘significantly more common’ in babies who had been exposed, particularly if the exposure occurred during the third trimester.

“Our results identifying an association between prenatal exposure to SARS-CoV-2 and neurodevelopmental diagnoses at 12 months are consistent with a large number of publications, including human and animal studies linking maternal viral infection and activation maternal immune system with neurodevelopmental disorders in offspring later in life, some of which can be predicted as early as the first year of life,” the authors wrote in the study.

Researchers found that 14 of 222 exposed babies, or 6.3%, and 227 of 7,550 unexposed infants, or 3%, had been diagnosed with some form of neurodevelopmental disorder, including those involving motor function, expressive language and speech. The median time to diagnosis was also earlier in those exposed in utero – at 214 days – against 275 days in those who were not.

The results were notable even taking into account preterm delivery, but since these children are still only two years old or younger, larger studies with a longer follow-up period were needed to confirm if there is a definitive link. , the researchers said.

“Notably, although we identified a greater risk of preterm delivery in SARS-CoV-2 positive mothers as in previous studies, the adjustment for preterm delivery did not account for all of the observed increased risk. to incur a neurodevelopmental diagnosis,” according to the article.

“Furthermore, the magnitude of this association was only modestly diminished in infants born at 37 weeks or later.”

The study noted some limitations to its research, a key one being the short time frame of the analysis.

“We cannot exclude the possibility that additional neurodevelopmental effects manifest later in life; indeed, the offspring analyzed here are younger than the age at which neurodevelopmental disorders such as autism are typically diagnosed,” the authors said.

“Conversely, there may be a form of ascertainment bias resulting from greater concern for the offspring of mothers who have been ill during pregnancy, i.e. parents may be more inclined to ask for a assessment, or clinicians more likely to diagnose or refer for assessment.”

Newborns who had been exposed to the virus before birth had more difficulty relaxing and adjusting their bodies when held and cuddled, and also had more difficulty controlling their head and shoulder movements by compared to those who had not been exposed, according to the researchers behind the Spanish study. As in the US article, the differences were more noticeable if the infection occurred late in pregnancy.

Hormonal and biochemical analyses, movement responses and other tests were performed during and after pregnancy on the parent, while testing on the infants included measurement of movements and behaviors according to the neonatal behavior (NBAS).

“Not all babies born to COVID-infected mothers have neurodevelopmental differences, but our data show that their risk is increased compared to those who are not exposed to COVID in the womb,” said Dr. Rosa Ayesa Arriola, neuropsychologist and senior researcher at the Valdecilla Research Institute (IDIVAL) and the study’s project leader, in a statement.

The Spanish researchers only presented data from pregnancy and the six-week postnatal assessment and said it was part of an ongoing project that will continue to monitor language and motor development.

“In babies so young, there are several things that we just can’t measure, like language skills or cognition. We also need to be aware that this is a relatively small sample, so we are repeating the work and will follow it up over a longer period,” co-investigator Nerea San Martin Gonzalez said in a statement.

Dr Torri Metz, from the Department of Obstetrics and Gynecology at the University of Utah Health, said the preliminary data from the US study was critically important, but noted that the results came from children who have been exposed to early and alpha variants of COVID-19, as they are the only ones old enough to undergo some of the most rigorous neurodevelopmental assessments.

“Given that we are only 2 years away from the pandemic, much of the effect of in utero exposure to maternal SARS-CoV-2 infection remains poorly understood,” Metz said, who did not participate in the study, in a JAMA editorial comment. Open network.

Previous studies have already suggested a link between severe infection and higher risks of stillbirth and premature birth. An earlier longitudinal cohort study in China of 57 babies who had prenatal exposure to COVID-19 found deficits in the socio-emotional domain of neurodevelopment at three months of age. One study found that the Delta variant significantly damages the placenta. The authors of another recent paper involving people exposed and unexposed to COVID-19 during pregnancy suggested that developmental setbacks may be the result of being pregnant during the pandemic itself, rather than exposure to the virus. virus itself.

Meanwhile, a Canadian preprint study from Alberta Children’s Hospital based on a large pan-Canadian sample of pregnant women showed that high prenatal maternal distress was associated with changes in the brain development of their babies.

“We wonder if it’s the virus itself or the societal changes and stresses of the pandemic that are negatively affecting childhood outcomes,” Metz said, adding that knowledge about the effects of other variants still matters. default.

“It is not surprising that the pandemic and in utero exposure to maternal SARS-CoV-2 infection may have a negative effect on neurodevelopmental outcomes in young children. In a retrospective cohort study, [the U.S. study] …can only demonstrate associations, and causation cannot be determined.