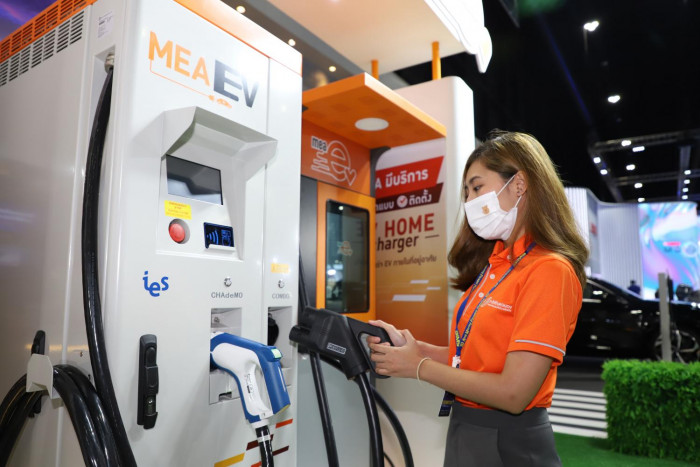 An EV charging unit, presented by the Metropolitan Electricity Authority, was among the highlights of this year’s Bangkok International Motor Show, which saw the number of EV reservations increase by 10%. (Photo: Varuth Hirunyatheb)

Sales growth amid the ongoing pandemic was due to marketing campaigns and state-backed promotion of electric vehicles, said Jaturent Komolmis, vice president of the auto show and general manager of Grand Prix. International Plc, which organized the 12-day event.

“Internal combustion engine cars continued to dominate bookings, accounting for 31,896 units of total bookings, an increase of 14.4%,” he said.

GWM’s MG EP, MG ZS EV and Ora Good Cat are some of the manufacturers’ most popular models. The two companies have totaled 1,520 orders for these models.

“Both brands have received a good response from buyers as they have signed agreements with the government to join its incentive scheme for electric vehicles,” Mr Jaturont said.

The package, which includes tax cuts and subsidies ranging from 70,000 baht to 150,000 baht, aims to promote the consumption and production of electric vehicles between 2022 and 2023.

In the motorcycle segment, reservations increased slightly by 2% to 2,040 units.

The event was expected to boost domestic car sales, but the Thai Automobile Industry Association has expressed concern that the Russian-Ukrainian war threatens to cause a shortage of auto parts for European automakers, which which will affect global supply chains and car assembly in Thailand.