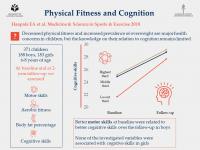 Boys with good motor skills are better problem solvers than their less able peers, according to a new Finnish study. Unlike previous studies, researchers found no association between aerobic capacity or overweight and obesity with cognitive function in boys. The results are based on the Study of Physical Activity and Nutrition in Children (PANIC) conducted at the University of Eastern Finland, and they were published in Medicine and science in sport and exercise.

The study found that boys with better motor skills at baseline had higher cognitive scores over a two-year follow-up period than boys with lower motor skills. Unlike previous cross-sectional studies, the present study shows that children with different levels of aerobic fitness or body fat percentage did not differ in terms of cognition. In fact, boys with better aerobic capacity at baseline had poorer cognition over the two-year follow-up than those with poorer physical condition.

In girls, none of the above factors were associated with cognitive skills. This may be due to biological or socio-cultural differences between boys and girls.

The results also show that boys with better motor skills at baseline had a lower increase in their cognitive skills than those with weaker motor skills.

“It’s important to remember that these results do not necessarily reflect a causal relationship between motor skills and cognition. Boys with weaker motor and cognitive skills at baseline caught up with their more skilled peers during the two-year follow-up. “, explains Postdoctoral Researcher Eero Haapala from the University of Jyväskylä. Dr Haapala is also Assistant Professor of Pediatric Exercise Physiology at the University of Eastern Finland.

The results suggest that motor and cognitive skills are associated with each other in boys; however, it would be premature to claim that motor skills stimulate cognition. Additionally, the study found no association between aerobic capacity or overweight and obesity with cognition.

The study examined longitudinal associations between motor skills, aerobic capacity, and body fat percentage with cognition in 371 children aged 6 to 8 at baseline. Motor skills were assessed by agility, balance and manual dexterity tests, aerobic capacity by a maximal ergometer test, and body fat percentage by a DXA machine. Cognition was assessed by the Raven matrix test. Several confounding factors such as parental education level and annual household income were taken into account in the analyzes.

Medicine and science in sport and exercise

Warning: AAAS and EurekAlert! are not responsible for the accuracy of any press releases posted on EurekAlert! by contributing institutions or for the use of any information via the EurekAlert system.