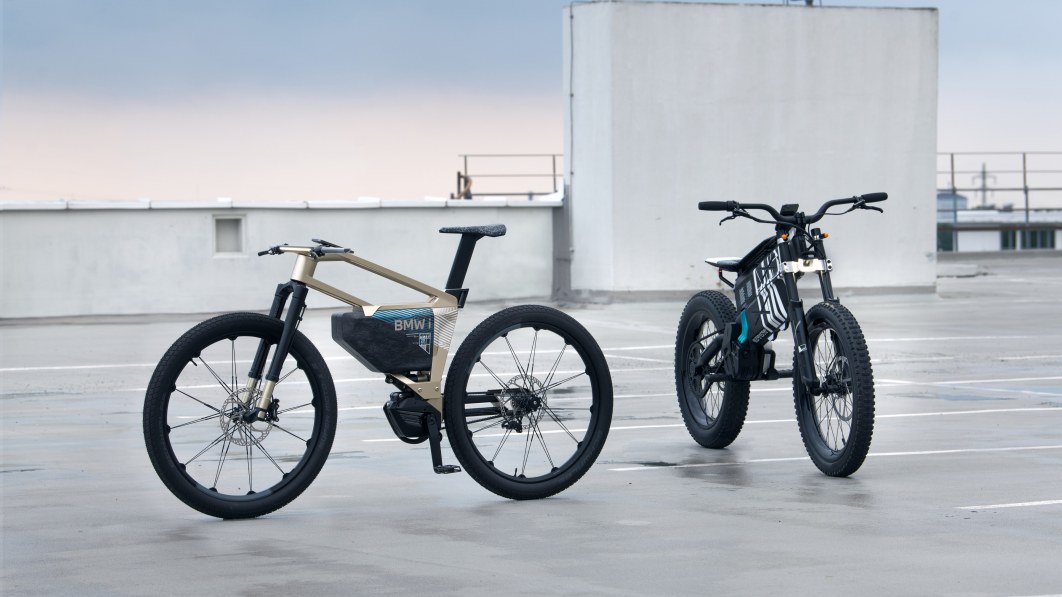 BMW has been on the right track with two-wheeled means of transportation lately. The Munich Motor Show is no exception, as it now hosts the reveal of the BMW i Vision AMBY and Motorrad Vision AMBY.

We’ll start with the Motorrad Vision AMBY, as it’s the closest to a motorcycle of the two bikes. The term “AMBY” is short for Adaptive Mobility, which perfectly describes the purpose of this bike. BMW says it was designed with the brand’s enduro motorcycle in mind as styling inspiration. It has big tires wrapping around the wheels to suggest off-road use, and the seat height and fixed footpegs try to lend a motorcycle vibe to the experience.

The i Vision AMBY (below) looks much more like a traditional, albeit exotic, road bike. It’s slim and has tires big enough to soak up bad road surfaces in city centers. Sustainability is also part of its construction, as the bike is made from the same recycled materials as BMW’s i Vision Circular, also revealed at the IAA show in Munich.

Both bikes have batteries and drive units housed in the center of the frame. The pair share speed capabilities and technology to achieve said speed. Top speed for both bikes is 37 mph. However, you will need to have the appropriate insurance and license plates to travel at this kind of speed on multi-lane roads outside of city centers. BMW has built in automated driving modes based on your location (using geofencing technology) that ensure you’re traveling at the right speed for the specific road you’re on. For example, cycling is limited to 15.5 mph on bike paths and 28 mph on city center roads. You’ll also have to pedal to get the assist from the electric drive – when pedaling, just squeeze the throttle lever on the handlebars to get the electric boost. The bikes display the speed mode they are in for other motorists so people know how fast they might be traveling as well.

BMW does not quote the lineup or specs for the Motorrad Vision AMBY, but it does for the i Vision AMBY. The latter is equipped with a 2 kWh battery which recharges quickly in three hours. You’ll be able to do 47 miles at the bike’s 37mph top speed (assuming you’re pedaling) and 186 miles at the slower 15.5mph speed level. We assume the Motorrad Vision AMBY will cover considerably less distance given that it weighs more than twice as much as the i Vision AMBY (66 pounds vs. 143 pounds).

Since these bikes can theoretically be ridden outside of town, BMW has incorporated a number of safety technologies into them. Bikes can be equipped with ABS, automatic high beams, brake lights, daytime running lights, tire pressure monitoring and a rear proximity sensor (to inform you of cars approaching from behind). BMW’s smartphone as a key technology is also used here. The bike will come to a standstill if its owner’s phone is not there to activate it. In addition, you can sync multiple phones to it, and the power seat will automatically adjust to the ride height set by the specific driver.